The Laakso Platinum Group Element (“PGE”)-Nickel-Copper Project is located in central Finland, adjacent to the border with Russia, around 40 km north of the town of Taivalkoski. The property is accessible by road, with the port city of Oulu 190 km to the southwest. GESI’s  reservation permits cover an area of 1,400 square kilometres (km²). These permits are located adjacent to the permits that make up Palladium One’s (TSX-V:PDM) 38km² Läntinen Koillismaa (“LK”) and 200km² Kostonjärvi (“KS”) PGE-Nickel-Copper projects, where three large PGE-Ni-Cu deposits have been defined and exploration results indicate the potential for a additional mineralisation along both the Kaukua and Haukiaho Trends.

This resource estimate comes from three deposits, two along the Kaukua Trend the other along the Haukiaho Trend but Palladium One is confident that the area contains a lot more mineralisation as the resource estimate only covers approximately 5 kilometres of the 38-kilometer marginal series contact zone. Historical reconnaissance drilling has indicated mineralization along the entire 38-kilometers.

Palladium One’s near-term targeting includes two additional open-pit targets in the Kaukua Area and possibly multiple open-pit targets along the 17-kilometer Haukiaho Trend. Two areas of Target Potential have been defined for near term resource expansion, Kaukua Far East and Haukiaho Eastern Target, representing an additional 2.4-kilometer of strike length along the favourable marginal series and could add between 21.6 million and 36.0 million tonnes of resource.

Palladium One is currently conducting a drill programme on the Kaukua West Zone, where a large induced polarisation (“IP”) anomaly has been defined to the west of a fault that was thought to cut off the pit constrained Kaukua resource estimate. The Kaukua West Zone anomaly is the strongest IP response within the whole greater Kaukua area and could represent high-grade mineralization that could support an underground PGE-Ni-Cu mine. IP has proven to be a reliable technique for discovering and outlining shallow higher grade PGE-Ni-Cu mineralization at Kaukua and elsewhere on the LK project.

IP anomalies also extend beyond the pit constrained Kaukua Resource to the south and are coincident with regional airborne magnetic anomalies and strongly suggests that Kaukua-style mafic-ultramafic hosts rocks extend into this area. This anomaly is a significant drill target for Palladium One and may represent another higher-grade core zone similar to the western portion of Kaukua South Discovery. This area is yet to be drill tested and is in proximity to GESI’s licences.

The resource on the Kauka Trend comprises a 3 km section of the 5 km total anomaly strike.  At present the resource at Haukiaho consists of an Inferred Mineral Resource Estimate of 18.9 Mt containing 0.29 Moz TPM at a grade of 0.48 g/t TPM.

Palladium One has recently competed an IP survey covering a 5 km section of the Haukiaho Trend, defining three strong chargeability anomalies. Two of these anomalies, the Western Target and the Central Target contains the current Haukiaho Trend mineral resource estimate, while at the Eastern Drill Target, Palladium One completed a reconnaissance sampling programme in 2019, returning up to 3.3 g/t Pd_Eq. (0.51% Cu, 0.33% Ni, 0.56 g/t Pd, 0.18 g/t Pt, and 0.21 g/t Au).

PGE bearing boulders have also been discovered along trend of these targets within Palladium One’s Kostonjärvi Project (“KS”) just 5km from the boundary with GESI’s Laakso Project.

The Laakso Project cover a large portion of the Koillismaa–Näränkävaara Intrusive Complex. The intrusive complex is comprised of the Koillismaa Intrusion to the east, which contains the Koillismaa PGE-Ni-Cu Belt, and the Näränkävaara Intrusion to the west. A strong positive gravity and magnetic anomaly (considered to be a major dyke at depth) connects the two parts of the complex (shown in green in image above). The anomaly is around 60 km in length and 1 to 3 km deep. Magnetic (above) and Bouguer gravity anomaly (below)

This major dyke is believed to be genetically related to the formation of Koillismaa PGE-Ni-Cu Belt potentially acting as a conduit for the mafic-ultramafic magma that formed the mineralisation. The potential dyke and the host rock surrounding the dyke are considered to be a significant targets for additional PGE-Ni-Cu mineralisation. The Laakso Project covers a significant portion of this potential dyke. 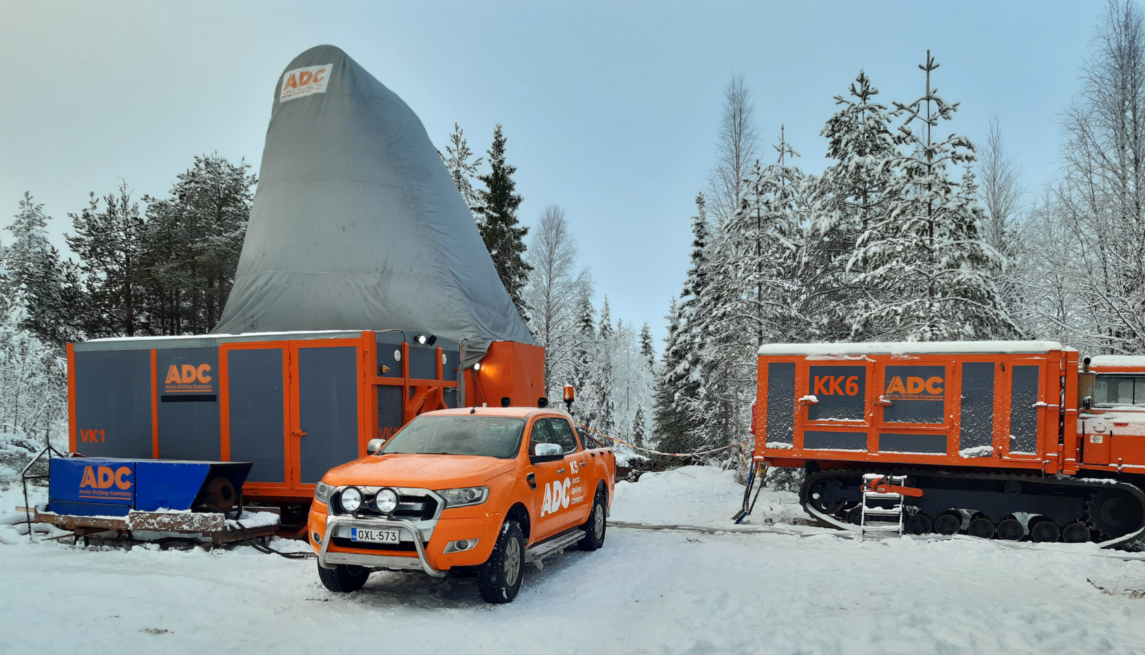 The Geological Survey of Finland (GTK) is currently drilling a 3 km deep hole in southern Kuusamo, Finland, using a specially designed drill rig to test the geophysical anomaly believed to be a dyke. This hole is located within GESI’s Laakso Project. This ambitious project is pushing the boundaries of modern drilling technology.

The top of the dyke was intersected by the Koillismaa Deep Hole at a depth of 1,423 m and at this depth the rocks within the drill core change from felsic to ultramafic. Drilling of the borehole was suspended for technical reasons in February 2021 at depth of 1.7 km, drilling is expected to be resumed in the near future. The bottom of the dyke is indicated by seismics  to be at depth of about 3 km.

Core from the top of the anomaly zone. Metamorphosed olivine-pyroxene-cumulate rock.

GESI will continue to monitor the progress of the Koillismaa Deep Hole with interest.

spotlightmining.com: The Koillismaa Deep Hole – Solving the mystery of the hidden dyke

The Archaean Karelian Craton is prospective for diamondiferous kimberlites due to good conditions for diamond preservation, with a low geothermal gradient and thick lithosphere. GESI believes that the craton is has been historically under-explored for kimberlites and lamproites, and by using a modern approach there is significant potential for a discovery.

25 classical diamondiferous kimberlite occurrences have been discovered so far in the Kuopio and Kaavi clusters, within the Karelian Craton. The kimberlites range from dykes up to 700 m x 30 m in size to nearly circular diatremes up to 400 m2 .

These reservation permits are located around 200 km from the Lomonosov and Grib diamond fields of Russia, which contain major diamond deposits. Kolkonjärvi contains five kimberlites, one of which, Kattainsenvaara, occurs within the protected hiking area and will not form part GESI future exploration programmes. Kylmälahti contains six kimberlites. Finland has been consistently ranked by the Fraser Institute in Canada as one of the top ten mining jurisdictions in the world over the past nine years, based on mineral endowments and public policy factors.

The country benefits from a strong mining tradition with over 40 operational mines and ten smelters and steel mills, supported by a robust mining law with strict but clear mining and environmental legislation.

As a developed European Nation, it benefits from extraordinary infrastructure, as well as a highly skilled and experienced work force and a well developed and innovative mining ecosystem.

Finland is one of the most important mining technology hubs in the world having more than ten mining related universities and research organizations, as well as over 200 mining technology exporters providing products and solutions to enhance sustainable and productive mining.

Finland has a low corporate tax at 20% and no mining royalties.

Learn more about other GESI projects...